What Homeowners Should Know About Proper Ventilation

Attic ventilation is essential and is an important part of your home's design and construction.

And because it helps keep the roof deck uniformly cool in the winter, attic ventilation (along with proper attic insulation) can help prevent the uneven freeze/thaw cycle associated with snow on your roof that often leads to ice dams which can backup water under shingles causing roof deck and interior sheathing damage.

Be sure your attic has enough intake vents. They are crucial to the attic ventilation system and are often overlooked. 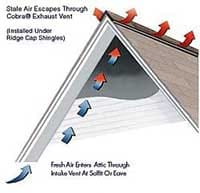 Ridge vents are the most efficient exhaust vent for your attic

A ridge vent, which is installed at the peak of your roof, is the best way to provide exhaust ventilation for your attic provided there is sufficient horizontal ridge length. It doesn't have any moving parts to break. It doesn't use any electricity to operate. And because it's installed along the entire peak of your roof, it ventilates the entire underside of the roof deck - as long as there is sufficient intake ventilation low at the roof 's edge or in the soffit/eaves. No other exhaust vent can ventilate the entire roof deck. The internal weather filter provides an extra layer of weather protection against wind-driven rain, snow, debris and insects. Unlike a furnace filter it is not treated with oil so it does not collect dust and will not clog under normal conditions.

Mixing Two Different Exhaust Vents on Your Roof Is a Mistake

One of the most potentially troublesome attic ventilation mistakes is having two different types of exhaust vents on your roof - for example, mixing a ridge vent with a powered fan or a roof louver. Technically, this mistake is called short-circuiting the attic ventilation system. Here's what can go wrong during short-circuiting: Because air always follows the path of least resistance and is always looking for the nearest opening, the ridge vent at the peak of your roof could pull its source of intake air from the roof louver (which happens to be the closest opening) instead of from the intake vents low at the roof's edge or in the soffit/eaves. Roof louvers- or any exhaust vent, for that matter- are not designed to be intake vents. If air enters a roof louver, along with it could be rain, snow, dirt and debris right into your attic! Furthermore, the lower portion of the attic is inadequately ventilated. Therefore, don't mix any two types of exhaust vents on your roof if it's one common attic. Always stick with one system.

What Homeowners Should Know About Ice Dams 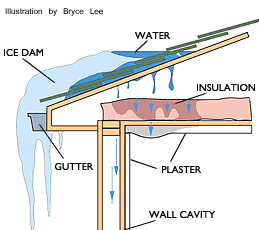 Ice Dams
In past winters, homeowners from Kenosha to Milwaukee to West Bend have learned about the damage caused by ice dams. In some cases, that knowledge came in the form of a costly repair bill. In addition to gutter damage, water infiltration from ice dams can also damage roof decks, insulation, exterior walls and paint, interior walls and ceilings. First signs are wood rot, peeling paint and mold. But some of the damage from ice dams takes longer to become apparent. Structural lumber soaked by infiltrating water, for example, becomes prime feeding and nesting sites for insects such as carpenter ants. That means several summers from now, homeowners may be facing carpentry repairs that are a direct result of a previous winter's ice dam problems. Roofing contractors have the opportunity to help homeowners avoid the short- and long-term problems that can occur as a result of ice dams.

What Causes Ice Dams?
A heavy snowfall-enough to leave several inches of snow on a roof. The more snow left on a roof after a storm, the greater the chances an ice dam may form. Continuously cold temperature as heavy snow followed by several days of 40 degree temperatures probably won't result in an ice dam. The air temperature must remain cold enough for water to freeze. When temperatures fall below 20 degrees, conditions are especially favorable. An under ventilated and poorly insulated attic, factors that create what amounts to a "hot and cold roof." When those conditions are in place, here's what happens:

Heat escapes from the living quarters into the attic. The heat builds at the upper levels of the attic, eventually warming the roof deck. Once the deck is warm, snow on the roof begins to melt. Obviously, if the sun breaks out following a snow storm, melting at the upper roof is accelerated.

Water runs down the roof until it reaches the area over the eaves. Since this area of the roof remains cold, the runoff from the melting snow begins to freeze and the ice dam forms (along with a more easily seen symptom of the problem, icicles hanging from gutters).

As the dam builds, it begins to trap more snow melt, extending the height of the dam. The real problems begin when water begins to pool, backing up under the shingles. Oncethat happens, the damage can be extensive. In past winters, it's been reported that a homeowner had to drill holes in a kitchen ceiling to release water infiltrating from an ice dam. It was just one of countless similar incidents.

How To Eliminate Ice Dams In Three Easy Steps Install adequate attic ventilation. Because ice dams form when a roof has warm upper surfaces and cold lower surfaces, the solution is to equalize temperatures over the entire roof. Heating an entire roof is impractical (and extremely costly), so the most effective solution is to create a cold roof. To do that, you need a well designed attic ventilation system: it must supply air flow along the entire underside of the roof deck and it must have air intake vents evenly spaced along the eaves. The most efficient system uses ridge vents and an evenly distributed layout of soffit vents. Cold outside air is drawn into the soffit vents, then washed over the underside of the roof decking-for the full length of the ridge. That's critical, because this evenly distributed air flow minimizes variation in roof temperatures from peak to eave. As a result, snow melt is reduced, greatly reducing the possibility that ice dams can form. Install adequate attic insulation. Attic insulation serves two purposes:

First, and most important, it minimizes heat loss from a home's living quarters. Since that heat loss is a key factor contributing to the creation of ice dams, stopping it at its source is critical.

Second, adequate attic insulation diminishes the energy impact of having cold air flowing through the attic. Check with your local utility company for up-to-date R-value requirements for insulation in your area. Be sure adequate amounts are installed around electrical fixtures and wiring and plumbing chases. These areas often contribute to significant heat loss. With existing insulation, also check for water damage and for areas that have been compressed by foot traffic or stored objects.

Third, install ice and water rubber membrane. Even the most efficient attic ventilation system may not be enough to eliminate all ice dams. Ice & Water rubber can minimize-and possibly eliminate-water infiltration into the building structure. In general, install Ice & Water rubber along the valleys, around chimneys, dormers and along the gutter lines. Along gutter lines go up the roof at least two feet beyond the interior wall line.